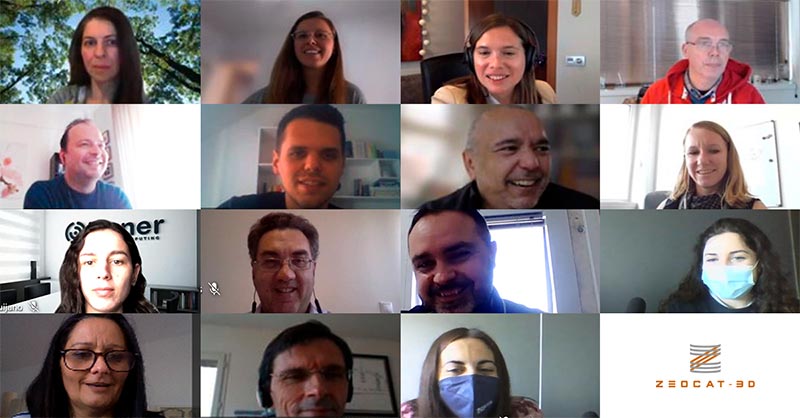 ZEOCAT-3D celebrates on track progress on its second birthday

Read more on the latest advancement by the ZEOCAT-3D project and its consortium partners.

Once more reunited on virtual mode on 26 March 2021, the ZEOCAT-3D consortium partners reflected on the progress made by the project during the first two years of working together. The “M24” online Teams meeting started with greetings from the Coordinator, Maria Tripiana (IDENER), to then delve into discussing project advancements.

The first presentation concerned the work conducted in Work Package (WP) 2 on the modelling of the catalyst design. Such work involves CNRS in collaboration with IDENER, APTL/CERTH, Lurederra, TECNAN, Bioenergy Negritas (BEN), DCS Computing, Hybrid Catalysis and Hellenic Petroleum. The partners developed Isothermal 2D models describing the hollow fibre gas mixture stream under steady-state conditions for both the upstream (biogas upgrading to biomethane) and downstream (H2 separation membrane process) components. These activities, and the validation of the gas-liquid membrane model and the gas separation membrane model, took place thanks to experimental data collected within activities related to WP5 on the processing and conditioning of inlet and outlet flows design. While modelling and process simulation is ongoing, the project investigates mass balances to determine the highest methane conversion rate using a kinetic equation and establishing it at 50%, as mentioned in the project’s grant agreement.

WP3 consists of the development and characterization of the bifunctional catalyst. Reported progress concerned the work of previously mentioned partners and VITO, the National Centre for Scientific Research “Demokritos” (NCSRD), the Eindhoven University of Technology (TU/e), 3D-cat, and CARTIF. In the last months, Lurederra and Tecnan carried out the initial production and characterisation of molybdenum (Mo) bimetallic nano-oxides by Flame Spray Pyrolysis (FSP), working on information from the modelling (WP2) and the catalytic system design (WP4), and producing 1% pt-Mo nanoparticles. The project recorded advancement in the synthesis and optimisation of the individual zeolite components (SAPO34 and ZSM-5) and the synthesis of more complex structures. Partners successfully carried out the scale-up synthesis of nano-ZSM-5 zeolite. They also developed different resin-based samples and proceeded to further analysis. As per the SAPO34 catalyst, it became clear that it will not be possible to form both zeolite materials together (a ZSM-5/SAPO-34 catalyst) in an in-situ templating approach.

Within the last months, the first testing of a 3D-printed catalyst took place, speeding up the validation of the new catalyst at the lab scale (WP4). It involved a kinetic study on methane dehydroaromatization on a homemade catalyst (Mo/ZSM-5 catalyst) provided by CNRS. Lurederra and Tecnan also carried out the physicochemical characterization of MoO3 nanoparticles and 1% Iron-molybdenum (Fe-Mo) complex nanoparticles. The flowmeter of the upcoming catalytic reactor plant was assembled and calibrated, and so were the start-up of the control and instrument system. CARTIF also established the gas chromatography analysis protocol.

ZEOCAT-3D’s partners also discussed the progress related to WP5, which focuses on processing and conditioning the design of the inlet and outlet flows, the construction and evaluation of the individual components, and the overall reactor design. Highlights on WP5 included mentioning that CARTIF completed the physicochemical characterization of the copper and zinc (Cu/Zn) oxide nanomaterials. Besides discovering that it is possible to recover high purity H2 in a single membrane stage, the researching partners learned that it is indispensable to have a catalyst with advanced catalytic properties because applying a binder can reduce them.

While the project progresses, colleagues in CNRS are already considering its environmental impact. In this respect, they are studying and comparing all nanoparticles, the different zeolite production and 3D printing processes. Such study also includes the definition of a “minimum commercial product”, which will consist of a 1m per 10cm reactor as a proof of concept for its future commercialisation. The potential health and safety-related risks are under scrutiny through specific investigations, pending the completion of work related to WP5 and WP6.

A few considerations were drawn on the overall communication related to the project. All partners congratulated CNRS colleagues on ZEOCAT-3D first published scientific article, and KNEIA presented the newly launched ZEOCAT-3D Multi-stakeholder platform. During the meeting, it was announced that colleagues from ZEOCAT-3D would participate in a joint webinar with sister projects on "New and innovative methods for the conversion of alkanes to olefins and aromatics". Finally, the reunion concluded with a workshop, led by KNEIA, on how to refine the current stakeholder analysis and better dissect, investigate and describe the innovative value chain proposed by the project.

“This was a very engaging and inspiring meeting” mentioned Maria Tripiana, ZEOCAT-3D’s Coordinator. “While many things are happening in the project, there will soon be even more exciting news on the reactor development and its on-site testing. ZEOCAT-3D is an EU-project to keep an eye on and engage with”, she concluded.

Reach out and connect with ZEOCAT-3D through our web contact form and via email at: info@zeocat-3d-eu