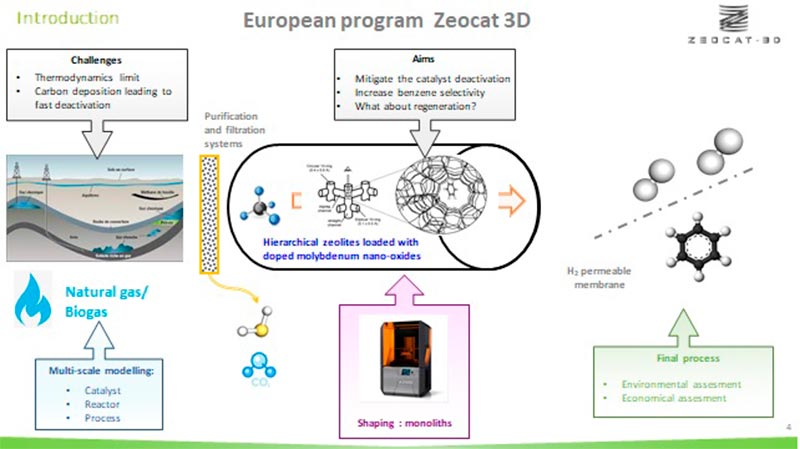 As we all know, the COVID-19 outbreak in 2020 led to a blank year in terms of scientific conferences, which put academic work and communication at great strain. While many events got canceled or postponed, some got rescheduled in 2021 in the form of videoconferences. One of the latter, the 36th annual meeting of the Groupe Français des Zéolithes (GFZ), aired as an online call on 30 March and 1 April 2021.

During such meeting, I gave a presentation entitled: “3D printing as an innovative strategy to enhance catalytic stability in the methane dehydroaromatization process”. It showcased part of the research I am involved in conducting forthe ZEOCAT-3D project asa PhD student for CNRS in Poitiers.

The seven members of the jury committee highlighted the quality of the delivered presentation and distinguished the performance with the congress second price - the first in the catalysis area. The assembly positively acknowledged the high level of the scientific approach, the reliability of the results, and the significance of the subject, praising the captivating slides design and the dynamism of the overall execution. The animated discussion following the presentation confirmed its solid quality.

Considering that the GFZ association gathers the principal players from industry and academia working in the zeolite research field in France, the achievement of ZEOCAT-3D is a great success, also given the approximately a hundred scientists from the synthesis, catalysis and adsorption areas who took part in this noteworthy event.

As already anticipated in a recent blog on the first scientific article published by my team for the ZEOCAT-3D project, growing hype has been surrounding catalytic methane dehydroaromatization (MDA) under non-oxidative conditions over the last thirty years. Such a direct route, which allows nothing less than the transformation of methane into benzene simultaneously generating sustainable hydrogen, offers incredible potential for the future of energy resources. However, its main challenges are far from being resolved. On the one hand, the one-step conversion into benzene is thermodynamically limited (12% at 700 °C), with low activity as a consequence. On the other, the catalyst deactivates rapidly.

Within the ZEOCAT-3D project, the consortium members are working on an innovative type of catalyst which is “3D shaped”. The overall project goal is to deploy, through process design, modelling, laboratory, and industrial involvement, a prototype reactor to transform methane into benzene.

The study presented at the GFZ annual meeting falls within the scope of the growing complexity of the catalyst deactivation within the MDA process. Thanks to our studies, we identified a new deactivation mode by catalyst poisoning. In this mode, the active molybdenum species chemisorb the polyaromatics compounds created during the reaction, thus blocking their access and making the reaction self-inhibited. CNRS colleagues in Lille are working on modelling the reaction, as well as calculating the absorption energy. All of this supports the assumption that the molybdenum moieties strongly adsorb the confined polyaromatics.

Additionally, we discovered that the free-CO2 autogenous hydrogen produced during the reaction plays a key role. Indeed, hydrogen has a beneficial effect on the deactivation modes previously determined, as it prevents the aromatic compounds from covering the active species inside the zeolite channel.

The presentation highlighted the results of a very fruitful collaboration between different consortium members involved in the ZEOCAT-3D project. First, our colleagues at Vito were responsible for printing sample catalysts using various materials and methodologies. They supplied the printed versions to our lab at CNRS Poitiers for further evaluation. Once we got to the testing results and interpreted them, we asked our partners at CNRS Lille to confirm our initial assumptions, using their expert modelling capability applied as a simulation of the ZEOCAT-3D's reactor.

This study enables us to provide new guidance for modelling, catalyst preparation, design, and 3D printing under ongoing investigation in work packages 2 and 3 of the ZEOCAT-3D project. It also reveals a starting point towards CO2-free hydrogen production, which is the primary purpose of both work packages 4 and 5.

A deeper understanding of the deactivation mechanism in MDA is crucial to develop the appropriate catalyst synthesis and mitigate the deactivation step, allowing the design of the most suitable, cleaner, and efficient process to transform methane into benzene.

However, keeping an eye for reactions by-products (such as hydrogen) could open the path for further scientific investigations in ways now still unforeseen within the scope of the project. It could also generate a substantial impact on issues related to climate change.

While laboratory experiments continue, we are writing a full scientific article on the presentation. Keep following our blog to find out more in the coming months.